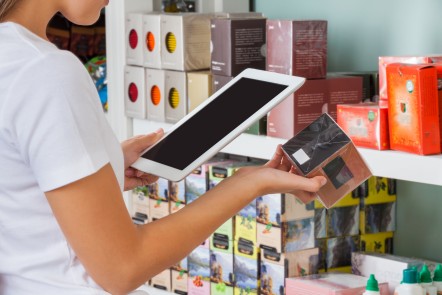 And The Most Common In-Store Mobile Activity Is Comparing Prices.

The method of choice for product research and purchasing is now digital channels. According to a study done by UPS, comScore and the e-tailing group in March 2014, 82% of U.S. digital buyers choose to research products from multichannel retailers on the internet. The breakdown is as follows: 61% of the research is done via desktop/laptop, 11% is done via tablet, 10% via smartphone and 13% of respondents said they would prefer to research items in a physical store.

Purchasing products from multichannel retailers with digital devices was also popular among the respondents, with 55% of individuals reporting they prefer to use a desktop/laptop, tablet or smartphone when buying products, vs. 41% of respondents who said they like to purchase items in brick-and-mortar stores. Although the tablets and smartphones trailed desktops and laptops by a long shot in terms of being the least preferred digital buying method, according to the survey, they are still a popular means to performing research and purchasing. The survey showed that 46% of users had made purchases on such devices.

Although the survey showed that desktops and laptops were the preferred method of choice for research, mobile devices (tablets and smartphones) were still gaining their ground — interestingly, both in and out of stores. Twenty-five percent of respondents reported researching products on their mobile devices before visiting stores weekly; and 22% stated they conducted research (including looking for alternatives) via mobile while at brick-and-mortar stores.

In fact, looking for alternatives (such as comparing prices and finding the best deal) was the most frequent in-store smartphone activity, reported by 36% of the respondents.

These results were confirmed by an earlier study done by Research Now for Swirl in November 2013. From the 85% of the U.S. smartphone users polled who had used a mobile shopping app while inside stores, 81% of them reported doing so to search for offers and sales.